JPEG Saver 4.0 changed the way that transitions worked from just using the old DirectX 3 DirectDraw functions for page-flipping to using DirectX 9's Direct3D for hardware assisted geometry and pixel shader transitions. Most of the transitions that were available in JPEG Saver 3.6 were re-implemented using the new, faster techniques.

JPEG Saver 5 rewrote the graphics code again, this time using DirectX 11. This means that the DirectX 9 libraries do not need to be installed or updated with JPEG Saver, and also provides support for displaying transitions on any machine that supports the WARP device. This should be anything using Windows 7 or later, where DirectX 11 is installed as part of the operating system.

Changed to using a more robust method for messaging between threads. Fixed F10 save desktop option saving grey bitmap. Added buttons to the background and style editor dialogs for swapping colours over. Improved error handling throughout.

Graphics code rewritten from DirectX 9 to DirectX 11. Ended use of SCRNSAVE.LIB for basic screensaver functions. Added fall off and ring wipe transitions. 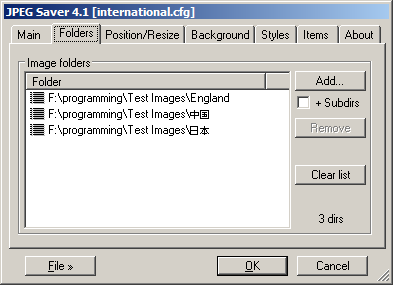 Version 4.1 changes things a bit. Instead of using a cache file to speed up loading the list of images, the list is stored in an SQLite database. Details of the last image displayed are also stored in the database, so there is no jpegsaver.last file either.

As well as this, version 4.1 allows the loading and saving of different config files - the current config file is shown in the dialog title bar. The other big change is that Unicode is supported in the dialog, in the folder and file names, and any text items shown by the screen saver.

Very little has changed in the final release version, but the installer has been improved to check if the required DirectX libraries are installed already.

There were a couple of bugs in preview 3, one of which could cause JPEG Saver to crash, so I've replaced it with preview 3a. The “Explode” and “Implode” transitions had a memory allocation problem and the dimmer would cause the non-primary screen to go black under some circumstances.

Preview release 3 contains these changes from the second preview:

Preview release 2 contains these changes from the first preview:

Please read this before downloading!

This version uses DirectX 9 - so you must have DirectX 9 installed to use it! If your computer doesn't support DirectX 9, then this version of JPEG Saver is not for you.

*** If you have DirectX 10 or DirectX 11 installed, that still does not mean that you have all the DirectX 9 libraries installed! ***

The JPEG Saver 4 installer comes with Microsoft's DirectX web installer, so you can install or update your version of DirectX from the installer.

JPEG Saver 4 requires the main D3D and D3DX libraries. If you get an error message saying that d3dx9_39.dll (or something similar) could not be found or loaded, then that means that your DirectX 9 installation is not complete.

If you choose the installer DirectX update option and you still get the d3dx9_39.dll error, then you should try installing using the full DirectX update: download DirectX from FileHippo.com

Since Windows 7 the DirectX 11 has been a part of the operating system. Unfortunately JPEG Saver uses DirectX 9, which isn't installed by default. The JPEG Saver installer will attempt to install DirectX 9 for you, but if you get an error message about a missing DLL when you try to run JPEG Saver you might have to install it yourself - see the FileHippo link in the section above.

I expect there are still bugs in this version - if you find any, please let me know and I'll do my best to fix them.

Before you tell me about missing transitions, please note that not all of the transitions from the 3.x version have been rewritten to work with the new rendering method; I expect I'll get around to them eventually.

If you spot anything else that appears to be broken, please contact me with whatever details you think will be useful by emailing graham (at) goat1000.com

The latest version is available from the downloads page.

« Back to top of page Main tab options »